How to model cost and duration riskis amd uncertainty related to the preparation of first Mars flight?

Task specific calculation modes can now be set in the MonteCarloProject. Also task table view can be switched between planned and actual data in the project display.

Join free MonteCarloProject webinars and get started with the free plan

Simulating projects in progress in MonteCarloProject

Users with simulation plan can now simulate projects which are already in progress in MonteCarloProject.

Project Management Association Finland's SIG-16 group 'Cleantech ja kestävä kehitys projekteissa' meets on Wed, Nov 11th  at 4 p.m. in Messukeskus, Helsinki. Event is organized in conjunction with the Projektipäivät, but it is free also for those association's members who do not attend Projektipäivät itself. Event's program can be seen at PMAF's pages.

A new Green project to start the autumn

After the summer break a new green project is introduced.

The summer comes with an example of a new green project. Take a look at the Green Project of June.

First Mars flight is approaching. Let's see how to plan the final phase with MonteCarloProject.

We are on the 1st of January 2025. OK, a bit optimistic, but let's go on. The WBS (work breakdown structure) for the MARS1 project consisting of final preparations and checks for the first Mars flight is shown on the picture 1.

In the MARS1 project task specific probability distributions fall into one of the following types:

For example majority of the tasks in spacecraft system checks might cost much more and last a lot longer than the most probable cost or duration, but the minimum cost and duration are quite close to the most probable estimates. Same applies to communication checks and launch pad related tasks in the 'Ground segment' section. 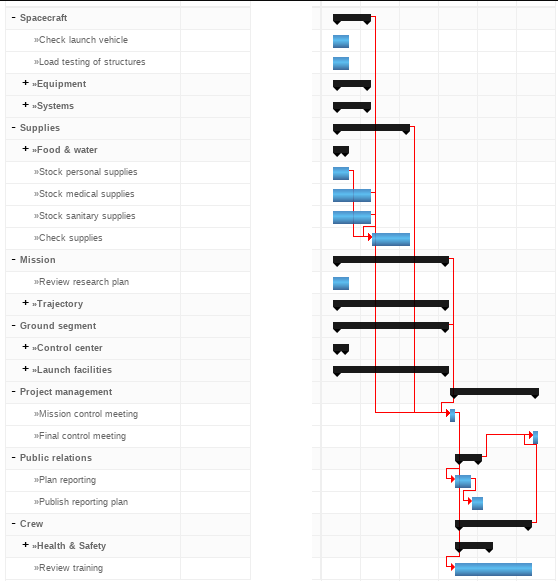 We can see that tasks under 'Spacecraft', 'Supplies', 'Mission' and 'Ground segment' need to be done before the 'Mission control meeting'. After the meeting tasks related to 'Public relations' and 'Crew' can be done. They are followed by the 'Final control meeting'.

Let's look at the results after running the Monte Carlo simulation with 500 rounds in MonteCarloProject. MARS1 project's total cost and duration distributions are shown in pictures 3 and 4. A separate article highlights the use of Monte Carlo method in project modeling. 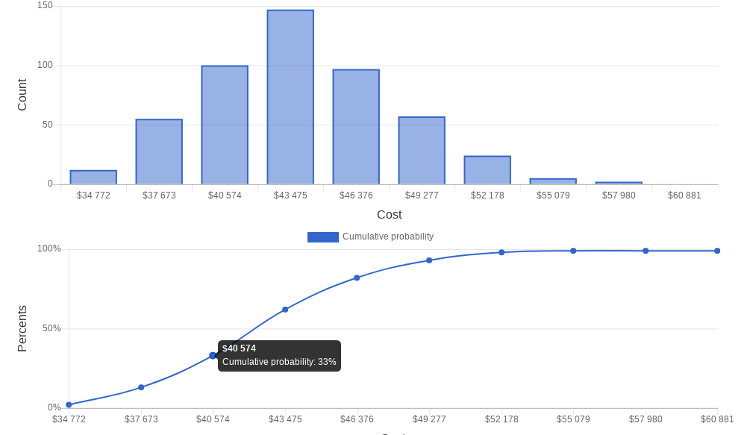 Having a look at the cumulative probability curve in picture 3 we can see that there's a 33% probabilty of project costing no more than roughly $40 500 and a very high probability (98%) of project's total cost staying under roughly $52 000.

MonteCarloProject shows also the hits (cost and duration) for each simulation round in a scatter chart (see picture 5).

Scatter chart is useful when finding out a probability of staying simultaneously below a certain total cost and duration for the MARS1 project.